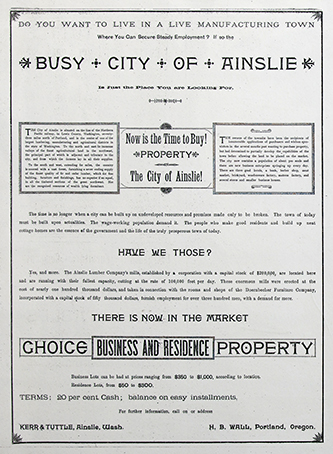 Allison and Neill Ainslie continue a long family tradition in the building industry.

The legacy of six generations of excellence in building trades began with David Ainslie, who settled in Lewis County in 1870. David built The Ainslie Lumber Company Mills and the little town that sprang up from this industry formed Ainslie, Washington. As was often the way of pioneer settlements in Washington Territory, the town disappeared in the late 1800s after the mill burned down. However, David’s son, Walter Ainslie, eventually returned to Lewis County to work in a lumber mill after building a homestead in Saskatchewan. Walter’s son, Harold Gordon Ainslie built houses in Seattle, mostly in the Leschi, Queen Anne, and Magnolia neighborhoods, after he retired from his career as a purchasing agent for a major steel manufacturer. Harold’s son, Hugh Walter Ainslie, followed in his father’s footsteps by building numerous houses and apartment buildings and multi-family projects in Seattle over the past 60 years.

Allison and Neill inherited the Ainslie passion about the construction trades. They carry on the family tradition because it’s in their blood. They formed Ainslie-Davis construction as equal partners in 1993, with the goal of creating beautiful buildings and they continue to transform the Puget Sound area with quality construction projects and a well-earned reputation for integrity in their business as well as their craft.

Under their leadership, Ainslie-Davis is a turn-key construction company with more than 100 projects, including both remodels and new construction.